The Beast from the East

Road markings become pathfinders as snow covers the main arterial roads. Once again I put myself at risk for a dumb shot. And I'll never learn. 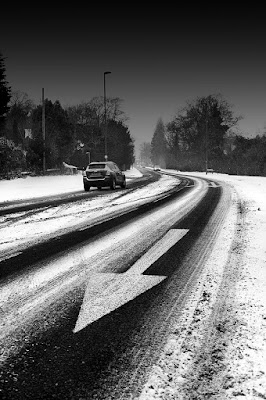 London's Underground. A place most photographers (if not commuters) actually enjoy. Like many others, I find the gloomy dark recesses quite attractive. This is from Bank Station and a walkway that is little used. This shot is surprisingly sharp considering a shutter speed of 1/15. (chosen to introduce some movement blur in the passing person) 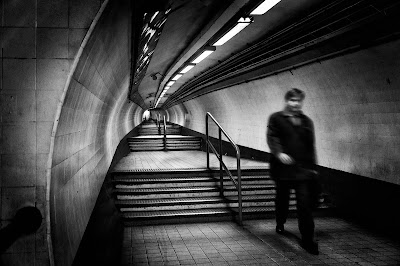 Back Streets of London

Back Streets of London 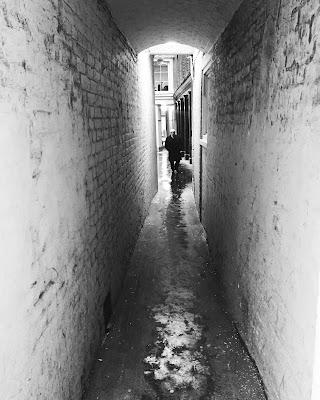 I love wandering around the back streets of any city and London is no exception. Hidden away behind the modern glass and steel skyscrapers is a mostly undiscovered world of alleyways, ancient churches speciality shops and old pubs.   And a phone camera is an excellent notation tool and the images produced are fine for viewing on a phone of course! This was taken on an old iPhone6.
Posted by Peter at 12:17 No comments:

Sad to see the demise of the on-line magazine F11, but very pleased that the very last issue featured my photos in a spread. Such an excellent magazine. Check it out HERE. 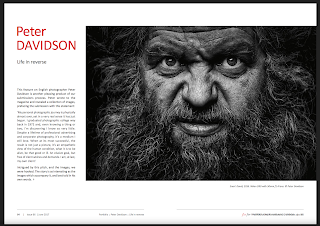 What actually makes a good photograph? 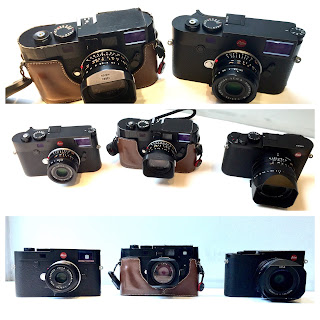 Instinctively - rather than thinking about it – I thought to find four words that described 'good' and 'not so good' photographs. (Thinking too hard hurts, is time consuming and is often wrong anyway).
What sprang to my lazy mind were these:
Good: Impact, Emotion, Connectivity and Execution
Bad: Prescribed, Contrived, Posed and Cutesy.
I'm not saying these four words are correct or definitive at all, just that they sprang to my mind. They are, I guess, just my personal bias. But what didn't spring to mind - at all - was the word camera.
Which I suppose is interesting since I've been considering chopping in my old M9 for the new svelte (and - cough - rather expensive at £5800 for body alone) M10.
So it was that I dropped into Leica City Store at the Royal Exchange in the City of London and the assistant manager there, Ludivine Combe, very kindly let me play with their new toy. But very briefly. No scientific test this. Just a rough and ready hand-held couple of snaps shot in the shop, against the light with mixed lighting thrown into the mix. It's how I tend to work anyway. Fast, and usually in difficult and awkward situations. With my venerable 35 year old lens placed on each camera for consistency.
The results were pretty much as expected. The new and bigger CMOS 24mp sensor (5976 x3984) was cleaner and with better detail than the old CCD 18mp ( 5212x3468) M9 version, obviously. The camera itself was slightly smaller, the viewfinder slightly bigger, the back LCD screen much, much better and there were less buttons on the back to press. However I think I would miss the M9's dedicated delete button. And I'm not enthralled by the fiddly ISO dial on top. On balance, I think I prefer the lines of the M9 though many would disagree. The bigger LCD screen is cool, but then I don't chimp that much anyway, so the rubbish M9 screen is adequate for my use. The shutter of the M10 is way better and more discrete. Big plus there.
And the Leica Q? Fixed, big lens wide-angle point and shoot. That huge look-at-me lens put me right off. No thanks.
So much for the Q, what about image quality of the M's? Technically, no contest. M10 wins it. But does it...? This little test of mine was horrid for the poor old M9. On the other hand, the M10 was designed for this and should have excelled. And it did. I missed focus with the M9 and nailed it with the M10. (I purposely didn't spend time making sure I was in focus, just shot like I usually do with each camera). Shadow detail was far better and noise well controlled on the M10. And yet...
That noise, weirdly, from the M9 is aesthetically quite attractive. In monochrome that is. In colour it's just simply horrid. But I tend to shoot in mono a lot. The graininess/noise kinda reminds me of Tri-X film. And, in good light, the M9's CCD can give really great colour results. The M10's CMOS gives smooth digital cleanliness all day long. Which I find a little bland. Perfect, yes, but also a little plastic looking. 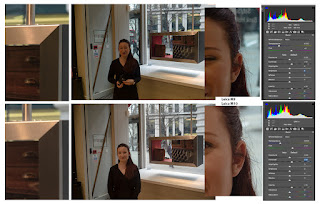 Is it worth me stumping up £4 grand to upgrade? Frankly, no. I've tried the cheap alternatives too. The Fuji and Sony mirrorless cameras are all fantastic but for me they are overly complicated with their electronic viewfinders filled with distractions and readouts that remind me of shooting video rather than stills. I want to concentrate on the scene in front of me, not battle the camera's menu system.
Which brings me back to to my opening thought. It should be obvious of course, but a camera in itself can never make a great or even good picture. It's the one in your hand that makes the difference. Whatever one you're comfortable with. It's the flea bitten mongrel dog that's far from perfect but it's still loyal and has an imperfect but big heart. Or in this case, for me at least, it's the one with the CCD.
My thanks to Ms Combe at the Leica Store City for her warm help.
https://leicastore-mayfair.co.uk/pages/visit-leica-city 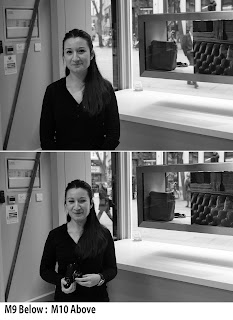 Last night they said the sky would be full of shooting stars. A veritable spectacular blizzard of meteorites, they said. And the night sky was clear of clouds. So I spent an hour after midnight getting my neck stiff and saw just the ONE f**ker. And yes, the camera was open, but the lens was too slow for the meteor to show up. Double Drat...

So instead, here's last month's once in a blue moon, Moon. 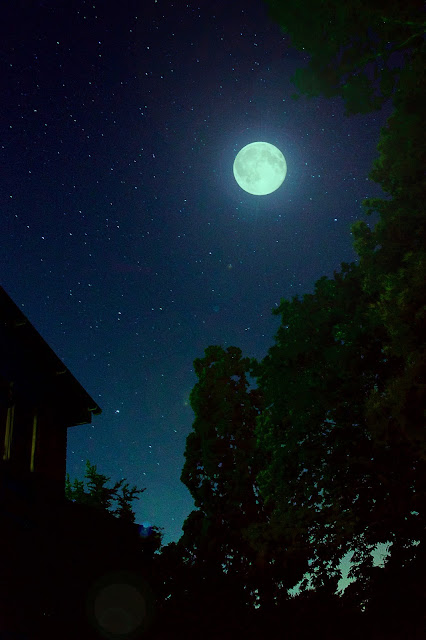 
That's how much people are paying for Richard Prince's art. Well, if you consider it actually art. His art. You see, he takes images from other people on Instagram, adds a few 'comment' words, then prints them up big and sells the result. Intrigued, I went along to see his gallery show in London. Four pages of BS hand-out written by the artist doesn't really convince me to his cause. Although his chosen images are strong, you can't escape the fact they aren't his. But I guess it's true his artistic vision has arguably brought these images to public view, when otherwise they would be lost. A grey disturbing area indeed. If you like this kind of art, save yourself $89,950 and print one of your own choosing from your own screen print of other peoples art, like from Richard Prince's own web site. Now wouldn't that be ironic... 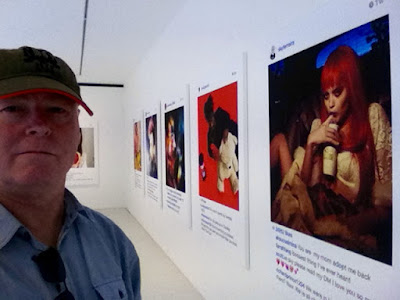 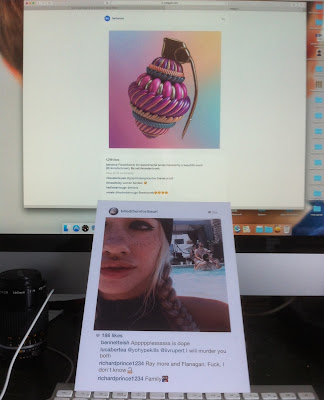 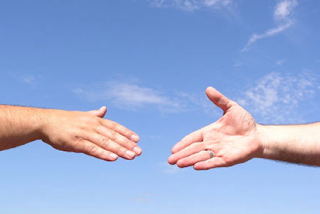 Scott was magnificent. Ripped, as the young say. Nothing like his skinny and dissolute father, where ever he might be. He'd re-appeared just once, years back, to see if he could tap the wealth of his famous son. But Scott would have none of it. I'd never been so proud. Until now.
'Here's some sweet tea, you want anything else, just call.'
'Sure.'
'Cake?'
'No, mom.'
'Some more biscuits?'
'Mom, no more biscuits, or cake, I'm fine, ok?'
The irritation in his voice hurt, but it was the defeat in his face that tore my heart out.
'Sorry, mom. For everything.'
I sat beside him on the bed and took his hand. I could barely feel him squeeze in return, fingers boney, skin as slack as my own. There wasn't anything more to say. Perhaps I would have judged, disapproved. And of course, I should have known. Should have guessed. Too busy working on my manuscripts to notice or care. I was as good as his no-good Dad.
Then he smiled. And I recognized that smile, it shone down from every movie poster, every photo. He was still with me.
'Hey mom, read me some of your latest …'
We both understood.
I began the final chapter.

(200 word flash story [plus or minus 10]  inspired by a photo and word prompt on the blog FlashFriday! Each week you have to write a story based on a photo and word prompt within the day. This is my first effort and compared to the others, not really good enough. It's challenging though, and I need that stick poking into me).
Posted by Peter at 11:01 No comments: 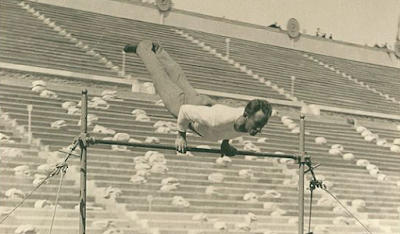 The friction-burn sears into tightened fingers. Release! The body unerringly knows where to find grip and then - push! I lean forward, fingers splayed anticipating the next move, muscles tense and bunched, the power within ready to be released.
‘Hey, Jack! You like that? Impressive high-bar work, huh?’
I relax and allow the tension to flow away from my body. At least from the part that I can still feel.
‘Sure, Tom, I like that’.
‘Listen Jack, he’s good but you were better, ya know?’
Yeah, I silently agree. But for the accident, I could have gotten gold.
‘Push me home, Tom.’

(Flash story in 100 words inspired by the above photo)
Posted by Peter at 10:56 No comments: 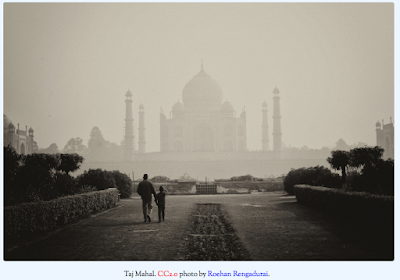 ‘Do you take cheques?’
The barman shook his head with the adopted expression of a man who’d just stepped into dog-shit while Bret counted his loose change malevolently into his personal puddle of beer on the bar.
Bret then tore the picture of his wife’s new man and his son into quarters. Some anniversary!
Downing his pint, feeling like a marionette controlled by an incompetent puppeteer, he walked unsteadily over to her.
Courage fuelled, the challenge was now to simply to speak.
In a voice he barely recognised he managed to ask the fateful question:
‘Would you like to dance?’

As it's the 200 year anniversary of this little skirmish with Boney, I thought I'd post this little battle re-enactment photo. 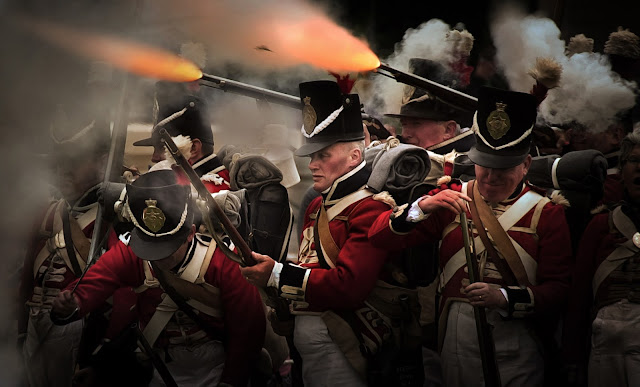 Found an interesting site that is powered by Adobe and which showcases some really excellent art, design and photography as projects. Called Behance, it allows you can create a 'project' that you then thematically link images into a set. A nice way of showing and hopefully getting work noticed. Here then, are my first two projects. I now need to think about new projects and also trawl my archives and create suitable new projects. Keeps me busy I suppose...

Trams & The People of Prague

Some images can be bought and framed by clicking HERE